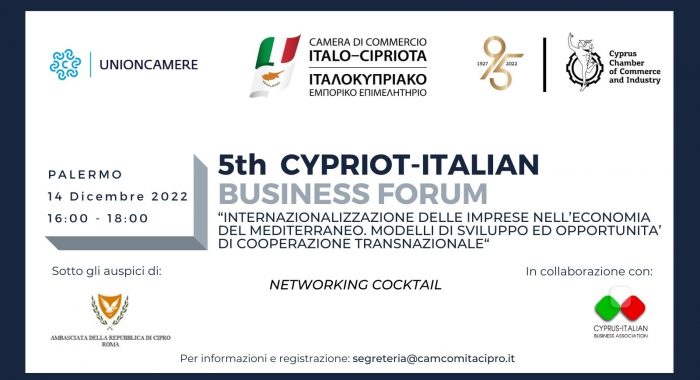 Today, Wednesday 14 December at 4 pm in the Conference Room of the Presidency of the Sicilian Region, in via Generale Magliocco n. 46 in Palermo, the fifth edition of the Cypriot-Italian Business Forum will be held entitled: “Internationalization of companies in the Mediterranean economy. Models of Development and Opportunities for Transnational Cooperation“.

The chamber event is co-organized with the Department of Productive Activities of the Sicily Region under the auspices of the Embassy of Cyprus in Italy.

The Cypriot-Italian Business Forum is organized annually by the Italian-Cypriot Chamber of Commerce and, after last year’s which was held in Rome in the presence of the Minister of Energy, Commerce and Industry of the Republic of Cyprus Natasa Pilides and the (at that time) Deputy Minister of Economic Development Gilberto Pichetto Fratin, is being held this year in Sicily by accepting the kind invitation of the Regional Minister for Productive Activities with responsibility for the Internationalization of Enterprises Edy Tamajo with the aim of placing the emphasis on the economy of Mediterranean focusing on development models and opportunities for transnational cooperation in the common matrix of insularity that characterizes Cyprus and Sicily.

The companies invited to the round table, some of them already present in Cyprus and in the area, will briefly dwell on their positioning in terms of internationalization with particular reference to the Mediterranean area, sharing possible models and best practices with the intention of providing indications that allow the Chamber, the Region and all the relevant institutions to provide the most effective support.

The Italian-Cypriot Chamber of Commerce will be represented by its founder and President Giuseppe Marino, Sicilian, also an expert in international corporate consultancy and business internationalization, who was particularly keen on organizing this event in Sicily, firmly convinced of the great opportunities cooperation in various sectors between Sicily and Cyprus in the common framework of the Mediterranean macro-region.

The event will be moderated by the General Manager of the Productive Activities Department of Sicily Region Carmelo Frittitta and will see the presence, among others, of the Honorary Consul of the Republic of Cyprus in Sicily Sebastiano Provenzano and Gaetano Collura, General Manager of IRSAP, as well as numerous entrepreneurs who will bring their testimonies.

For info on the content of this article and on the activities of the Italian-Cypriot Chamber of Commerce: segreteria@camcomitacipro.it