NewsCultural Identity as an Instrument of International Cooperation between Italy, Cyprus and Greece. 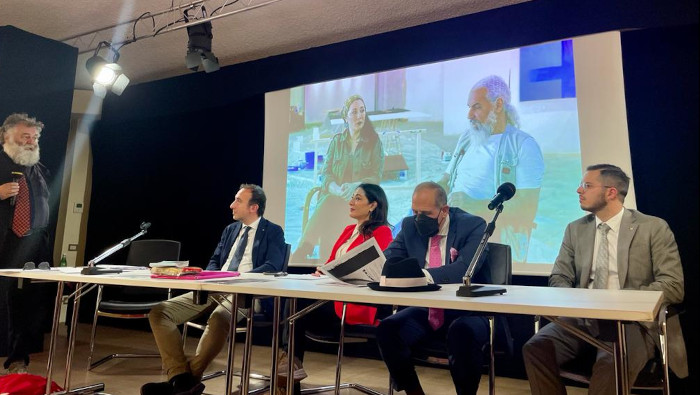 Cultural Identity as an Instrument of International Cooperation between Italy, Cyprus and Greece.

Business opportunities between Italy and Cyprus can also derive from culture. Indeed, it acts as a driving force to strengthen the ties between our countries, said President Giuseppe Marino at the presentation of the cultural project ‘Limitrofi – Only Space Remembers‘, which was held on 4th May in Milan.

The presentation, organised by the Associazione Culturale Leucò, previewed the bi-personal exhibition by Stefania Pennacchio and Vassilis Vassiliades and a study day organised under the aegis of Jean Blanchaert. The idea was born from the collaboration of Stefania Pennacchio, Vassilis Vassiliades and Salvatore Nicosia. The project aims to ideally, culturally and geographically unite different places in Sicily, Calabria, Greece and Cyprus. Through art, in fact, the aim is to create an ideal territory of dialogue and comparison between countries that are temporally and spatially different, in which the classical Greek matrix common to the peoples of the Mediterranean basin is alive.

“Limitrofi”. The Project that Unites Italy, Greece and Cyprus.

The inspiration for the event comes from the classical origins of the capital of Syracuse: the project will start on 2 July at the former Convent of the Retreat in Ortigia, Syracuse. As for the choice of places, this will be where the sedimented and still recognisable identity traces of the culture of Calabria and Hellenophone Sicily can be found. The project will then move on to Athens in October, before closing in Nicosia, Cyprus, in April next year. This artistic journey is also a journey to the centre of the Mediterranean and marks the boundaries of Europe itself.

Business Opportunities between Italy and Cyprus

The Italian-Cypriot Chamber of Commerce has always believed in the opportunities that can be developed by cultural contacts and processes at an international level. In addition to promoting a country’s image, they create a virtuous circle that contributes to the development and consolidation of relations. Culture is in fact a tool of the country’s true ‘diplomacy’.

During his speech at the presentation of the project, President Giuseppe Marino said that the Chamber has always been attentive to cultural sensitivity and supports activities aimed at involving an international audience to explore the origins of the common European identity. The Chamber is actively participating in the ‘Limitrofi’ project with its patronage, in the belief that new opportunities for encounters on the Italian-Cypriot axis can be opened up. “Culture acts as a flywheel for the development of the economy, and creates business opportunities between Italy and Cyprus, involving many sectors, from transport to tourism and trade in general, as well as strengthening the ties between our two countries,” said President Marino.