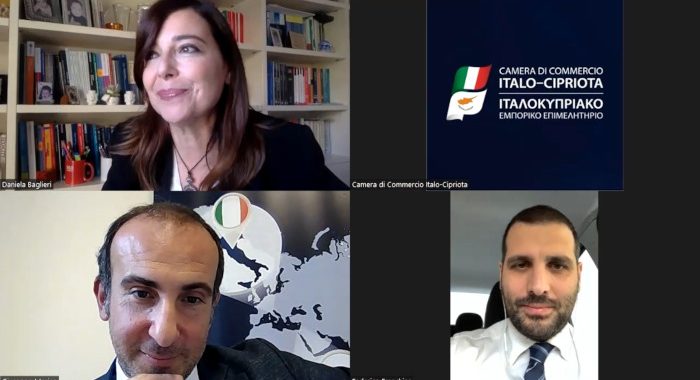 It was held on Thursday 24th the November Smart Talk hosting Daniela Baglieri, Professor of Industrial Economics and Innovation and valued Member of the Advisory Board of the Chamber, focusing on “NRRP and Programmes. Opportunities for Cyprus and Italy Cooperation”.

After the introductory greetings by the President of the Italian-Cypriot Chamber of Commerce Giuseppe Marino, who introduced Prof. Baglieri, the event was moderated by Federico Franchina, Vice President of the Chamber.

Firstly, Professor Daniela Baglieri gave the audience a general overview of her role as a Professor at the University of Messina and the main areas of interest of your subject “Industrial Economics and Innovation”. She explained that universities can boost innovation and technology in several sectors, from pharmaceutical to nano-technology and energy. Universities can boost also the competitiveness of the industry and can open to new innovation models, connecting students, industry, and public bodies.

Then, she underlined how Universities can be an effective connection to Industrial economics. In fact, University, after research and teaching, has a third mission, which is in particular to create a link between academia and industry. The technology transfer office, supported by public funding, enables several mechanisms to put on the market the experimental projects elaborated within the academic area and can enhance the digital transformation of the country and its mindset. This project, within and European framework, can particularly enhance the energy and digital transition, through the support of industry operators and universities.

In regard to current projects in Sicily Region, as Prof. Baglieri was recently Regional Minister for Energy and Public Utility Services of Sicily, she told the audience what are the main sectoral program in the timeframe 2023-2027.

In the coming years, Sicily will benefit from various funds and resources. The European Social Fund for the Region foresees the allocation of Euro 6 billion, distributed over 5 objectives, which are digital transformation, on which 25% of the resources will be allocated, 2 billion will be devolved to green transition and renewable energies, as well as waste and water management, and circular economy. The other objectives are social cohesion, promoting social innovation, especially in rural areas, and finally, democracy, for a more efficient public administration and bureaucracy. To this is added the Recovery and Resilience Facility, with the allocation of Euro 14 billion for Italy, which will be invested in Southern Italy. The NRRP will also favor job creation, the recruitment of more women to balance the gender gap, and training in the digital and green transition. Ideas and projects supported by sound feasibility studies will be financed by these funds.

Today we are witnessing one of the biggest European interventions in the economies of the Member States, namely the Recovery and Resilience Plan under the Next Generation EU. Supporting the digital transformation and environmental sustainability of businesses means rethinking industry and infrastructure. A green economy means creating a zero-impact industry and creating efficiency in waste and water management, including a new way of producing energy. Monitoring also plays a key role in this efficiency.

At the moment, three objectives are being promoted: the production of renewable energy, as southern Italy is able to produce energy from solar and wind power, through the construction of new infrastructure and giga-factories. Agri-tech also plays a key role in the area of sustainability, through the reduction of land consumption, the use of renewable energy, and efficient land and water management. The second objective is to increase the energy efficiency of buildings, and the third is to experiment with a new way of producing, supplying, and consuming energy (e.g. hydrogen, in Apulia, Sicily, and Sardinia, where there are already hydrogen-producing industries, although not yet ‘green’), and smart mobility (electric mobility for hydrogen trains and ships).

With particular regard to Green Hydrogen, the Smart Talk highlighted the opportunities for bilateral cooperation between Italy and Cyprus in the Energy Transition sector, also recalling the meeting between Professor Daniela Baglieri and Minister of Energy Natasa Pilides, with the aim to create a Hydrogen Valley in the Mediterranean. Professor Baglieri underlined how important is to take the first step to start cooperation, beginning in the academic and research field, which can play scientific diplomacy. Not only Italy is taking steps forward with green hydrogen, but also Spain, Marocco, and also a cooperation between Cyprus and Italy can be valuable, as they have to face the same issues: waste and water management, renewable energies, tourism, and increasing digital health. The two countries can share their best practices and know-how. The Smart Talk was a call to action to sign agreements and start cooperating.

In addition, the webinar highlighted how the Italian-Cypriot Chamber of Commerce is supporting important Italian and Cypriot Groups involved, among others, in the mentioned sectors.

Professor Daniela Baglieri highlighted how the role of the Cypriot-Italian Chamber of Commerce in terms of creating synergies between Cypriot and Italian companies in order to get access to those funds, for example creating consortia, or also being the interlocutor between public bodies, Universities, and research institutes and companies, is fundamental.

She affirmed the Chamber is an orchestrator in this ecosystem, which plays a significant role because it coordinates, selects, and evaluates the key actors and put the stakeholders and the same table. The Chamber can boost cooperation with a particular focus, creating partnerships among Italian and Cypriot companies, but it can also involve other international players to participate in European Calls.

In his concluding remarks, President Giuseppe Marino emphasised that the opportunities in Cyprus are constantly growing and that the promotion of cooperation in the area of the Mediterranean has always been one of the pillars of the mission of the Italian-Cypriot Chamber of Commerce.

Since the beginning, the aim of the Chamber’s activities is to create awareness in several sectors and to bring together public bodies, private companies, universities, and research centres to pursue this goal, with the final aim of further promoting and strengthening cooperation between the two states.

For further insights on this article and other information on the activities of the Italian-Cypriot Chamber of Commerce, please write to: segreteria@camcomitacipro.it