NewsGreat Success for the 2nd edition of the Cypriot-Italian Health Industry Forum! 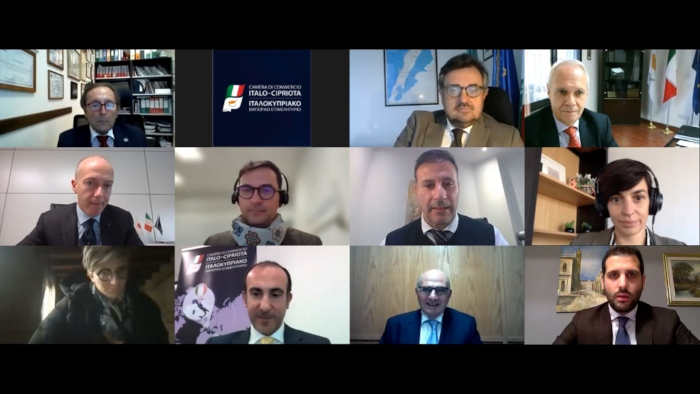 Great Success for the 2nd edition of the Cypriot-Italian Health Industry Forum!

It was held on 1st December in web modality the second edition of the ‘Cypriot-Italian Health Industry Forum’, under the auspices of the Embassy of Italy in Nicosia and the Ministry of Health of the Republic of Cyprus, organised by the Italian-Cypriot Chamber of Commerce together with the Cyprus Chamber of Commerce and Industry, in collaboration with the Cyprus-Italian Business Association.

The Forum, entitled ‘Innovation, Economics and Management in the Health Industry. Models of Excellence and International Cooperation’, featured a distinguished panel of guests who discussed opportunities for development, growth and collaboration between excellent research centres and companies in the Health sector.

Constantinos Katsaros, Vice President of the Italian-Cypriot Chamber of Commerce, moderated the meeting that has been opened by the President of the Italian-Cypriot Chamber of Commerce, Giuseppe Marino, who remarked the important potential in terms of cooperation in the health sector in the Mediterranean Region offering his thanks in particular the Ambassador of Itay, H.E. Andrea Cavallari, and the Ministry of Health of the Republic of Cyprus, represented by the Permanent Secretary Dr. Christina Yiannaki who sent a video message and all the authoritative speakers, representatives of Italian and Cypriot universities and companies in the health sector. “We can say that after the first Health Industry Forum – he continued – there have been real and concrete developments in terms of cooperation, and this is the aim of our Chamber. This second edition deals with Innovations in Health, one of the aspects with the greatest potential for cooperation”. The President thanked Marios Tsiakkis, Secretary General Cyprus Chamber of Commerce and Industry and Mr. Claudio Pasqualucci, Director ICE/ITA Beirut for Cyprus, Lebanon and Syria, with whom the Chamber works symbiotically to support businesses in Cyprus. He stressed the importance of Cyprus as a hub in the Mediterranean area for the development of the Health sector.

Mr. Claudio Pasqualucci, Director ICE Beirut for Cyprus, Lebanon and Syria, underlined the importance of the Forum as an opportunity to present Italian companies in the medical sector to Cypriot stakeholders, showing the interesting investment opportunities arising from the RRNPs and European projects.

This was followed by the institutional greetings of H.E. Andrea Cavallari, Ambassador of Italy to Cyprus, who said he was proud of the work done by the Chamber, maintaining and developing relations in the Italian-Cypriot axis with initiatives such as the Forums, which bring concrete proposals for cooperation between our two countries “different in terms of age of population, health systems, but with many companies ready to cooperate” and reiterated that the central role of Cyprus in the Mediterranean offers great opportunities in the near future.

The Permanent Secretary of the Ministry of Health of the Republic of Cyprus, Dr. Christina Yiannaki, sent a video message thanking the Chamber and hoping for more and more cooperation between Italy and Cyprus in the Health sector.

Then the Forum got into full swing with the speakers’ interventions.

Prof. Paolo Pozzilli, Department Endocrinology & Diabetes, Campus Bio-Medico University of Rome, described the influence that an excellent education in Medicine has on the future of the Health sector, described the advantages offered by the Campus and shared the need and opportunity of Erasmus exchanges to create new medical skills.

On the same line, Dr. Annalisa Quattrocchi, Department of Primary Care and Population Health, at University of Nicosia Medical School, presented an overview of the different Master’s degrees offered, together with the advantages of studies in the field of multidisciplinary research and informed about the existence of two Open Calls (Mental Health; Obesity) waiting for partners, within the Horizon Europe fund (2021-2027).

Mr. Sabino Di Matteo, Site Director & General Manager Operations Novartis, described the Torre Innovation Campus, located in Torre Annunziata (Italy) in a strategic position due to its proximity to ports and airports, as an innovative project, in which great space is given to research, start-ups, production facilities; he underlined the wide range of tax benefits and the availability of regional funds to be used also for internationalisation projects.

Mr. Sotos Jacovides, Managing Director MSJ Group in Cyprus, pointed out the opportunities offered to Italian companies that want to cooperate in Innovation projects in products and services in the healthcare sector.

Mrs. Michela Stancheris, representing Mr. Marco Ferlazzo, CEO Istituto COT SpA, Private Hospital in Messina (Italy), shared some platforms related to the rehabilitation sector, such as E-Motion, Show Motion Home 4 Covid, and talked about the ongoing collaborations with IRIB-CNR, reiterating the strong interest to develop partnerships in Cyprus in the fields of Human Resources and Orthopaedics.

Mr. Davide Campari, General Manager Medical Business Domain Fujifilm Italia SpA, described how the company has oriented the core business towards innovation in various fields, such as Healthcare (in which FujiFilm Italia occupies the third place in the world), thanks to the Research Development Area; he pointed out the sectors with opportunities for interaction, such as the One-Stop Solution project using AI/IT technology.

Mr. Mirko Maldè, replacing Mr. Antonio Simeone, Founder Euklid and CEO StonePrime, BioTech A.I., presented a new reality dating back to 2015, Moveax, which deals with supporting the growth of private companies and public institutions, focusing mainly on A.I. and blockchain, with applications in Cardiology and Diagnostics.

The Forum was concluded by the Vice President of the Italian-Cypriot Chamber of Commerce, Federico Franchina, who expressed his appreciation for the rich contributions of the speakers. “We know how complex the Healthcare sector is, as it involves education, research, pharmaceuticals, hospital management, technology. We will continue to give support to advance in this sector and not only in the emergency of the pandemic, because we are convinced that progress comes through cooperation between companies, institutions and countries”.

For further information and insights about the activities of the Italian-Cypriot Chamber of Commerce write to: segreteria@camcomitacipro.it