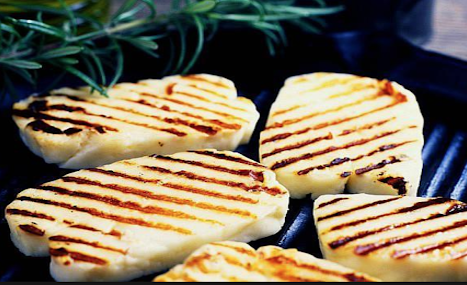 Χαλλούμι/Halloumi/Hellim: the white gold of Cyprus is PDO.

As of 1 October 2021, the marketing of Halloumi has started with the PDO (Protected Designation of Origin) label, granted to the typical Cypriot cheese by the European Commission in April 2021, after a long process that began in 2015.

Χαλλούμι/Halloumi/Hellim (in its three Greek, Cypriot and Turkish names) is a cultural symbol for the whole island of Cyprus: the production of this cheese dates back to Byzantine times (16th century), and is made by heating the curd of the mixture of goat, sheep and cow’s milk, placing it in brine and adding mint leaves, which give it a distinctive flavour and texture, allowing it to be cooked in a variety of ways, so much so that it is used as a meat substitute.

Its inclusion on the list of PDO, PGI (Protected Geographical Identification) and TSG (Traditional Speciality Guaranteed) products brings considerable benefits, not only in terms of protecting the name from imitation and abuse throughout the EU, but also in terms of boosting the economy for the island’s producers, who are the only ones authorised to use this label.

Halloumi PDO must follow precise indications regarding the rearing of milk-producing animals, the percentages of the different types of milk used (51% of goat and sheep with effect from 2024, the rest supplemented with cow’s milk), the compliance with European health regulations of the milk processing plants and the packaging in the form of a folded block. Producers will be supervised by a private European super partes body to ensure an impartial and independent control mechanism for both communities in Cyprus.

With regard to marketing and distribution in Europe, the Commission has circumvented the obstacle that prevented producers in the Turkish Cypriot part of the island from being able to use the PDO label in EU countries, allowing Hellim to circulate beyond the Green Line guarded by UN blue helmets, on condition that the cheese and the milk from which it is made, meet European animal and public health standards.

The aim was to create an opening for dialogue between the two parts of the island, based on a common feeling of national identity towards the typical cheese product, in order to start building trust and cooperation, achieving what has been called ‘the cheese diplomacy’.

The High Representative of the EU for Foreign Affairs and Security Policy Josep Borrel interpreted the extension of the quality label use to all Cypriot producers as “a strong signal, towards a common European future”.

The European Commissioner for Health and Food Safety, Stella Kyriakides, saw the unanimous approval of the PDO recognition by all EU states as an important safeguard not only of Cyprus’ unique national product, but also of the health protections, which are fundamental for the EU’s food safety, hoping that the whole of Cyprus will reap the economic benefits of this decision.

The President of the Republic of Cyprus, Nicos Anastasiades, enthusiastically welcomed the start of marketing of Halloumi PDO, writing on Twitter: “A key day for #Halloumi/#Hellim and for our country. The EU has registered it as a #PDO. Now there is a protective shield. Significant prospects of increased exports of our national product, benefiting all Cypriot, Greek and Turkish producers”.

Until 2019 the largest importer of Halloumi in the world (53% of the total) was the United Kingdom, which having left the European Common Market as a consequence of the Brexit, makes the European PDO label granted to the white gold of Cyprus more important than ever, in order to expand its target markets.

This is a sector that has a great impact on employment in the island, but which sees farmers and producers worried about the adaptation timeframe envisaged by the EU: they fear will not be able to meet the 51% share of goat and sheep milk by 2024 (currently 80% of milk is cow’s milk), because, as Andreas Andreou, secretary of the Cyprus Dairy Producers Association asserts, “according to the PDO protocol, the milk used must be from local goats, fed with a very specific feed, but currently the 70% of sheep and goat farms in Cyprus are not autochthonous”. The problem could be solved by extending the transition period beyond 2024 so as not to jeopardise the high demand for Halloumi/Hellim, which would thus be satisfied.

Product registration is not only a tool of agri-food and trade policy, but also of external relations: it is a measure aimed at protecting the cheese from imitations and counterfeitings throughout the rest of the Union, at guaranteeing European consumers that the product is authentic and thus representing an important economic return for the island’s operators.

With a view to encouraging cooperation between the two countries, the Italian-Cypriot Chamber of Commerce has already taken the first steps, offering its services to promote and market the ‘Halloumi PDO’ brand in Europe. The operation was born under the best auspices due to the consolidated trust between the entrepreneurs of the Italian-Cypriot axis, who see in this typical product a profitable investment opportunity.

The impulse given by the PDO mark will allow Halloumi/Hellim to enter the European large-scale retail chains, contributing to the growth of exports, thanks to the synergies between Italian and Cypriot companies, which will work on this new possibility for the economic development of the two countries.

For more information about this article and regarding the activities of the Italian-Cypriot Chamber of Commerce, write to: segreteria@camcomitacipro.it