News“Infrastructure and Transport.” Business Conference and Institutional Meetings during the Chamber’s Trade Mission to Cyprus. 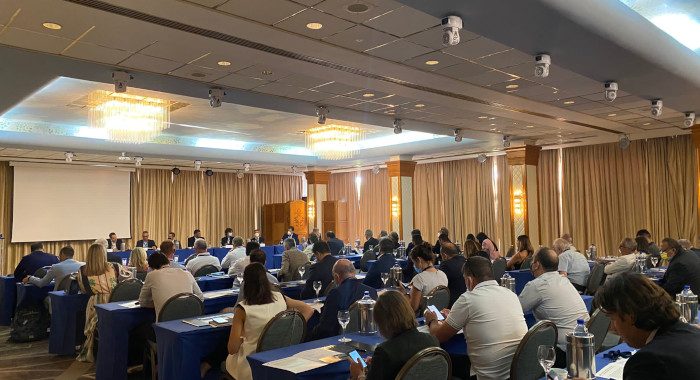 “Infrastructure and Transport.” Business Conference and Institutional Meetings during the Chamber’s Trade Mission to Cyprus.

A Trade Mission to Cyprus organised by the Chamber was held from 13 to 15 July 2022 with the main focus on the infrastructure and transport sector.

On the occasion of the Trade Mission, a Business Conference entitled “Infrastructure and Transport. Models of Excellence and International Cooperation in the Mediterranean Area”.

The conference, organised in collaboration with the Cyprus Chamber of Commerce and Industry and the Cyprus-Italian Business Association under the auspices of the Italian Embassy in Nicosia, was attended by the Italian Trade Agency – Beirut Office as well as the main associations and stakeholders of the respective sectors from Italy and Cyprus.

The conference, moderated by Vice-President Federico Franchina, was opened by the President of the Italian-Cypriot Chamber of Commerce, Giuseppe Marino, who underlined the importance and strategic nature of the sectors covered by the conference in the development of trade relations and cooperation between the two countries, and continued with the institutional greetings of Marios Tsiakkis, Secretary General of the Cyprus Chamber of Commerce and Industry, and Claudio Pasqualucci, Director of the Beirut Office of the Italian Trade Agency responsible for Cyprus, Lebanon and Syria.

It was then the turn of the institutional greetings of the Ambassador of Italy to Cyprus, H.E. Federica Ferrari Bravo who, after welcoming the Italian delegation, dwelt on the role of the Italian-Cypriot Chamber and the excellent relations existing between the two countries.

Of particular value and interest was the Address Speech by Yiannis Nicolaides, Permanent Secretary of the Ministry of Transport, Communications and Works, speaking on behalf of Minister Yiannis Karousos, who reiterated that relations between Italy and Cyprus are excellent and confirmed the government’s willingness to continue working on numerous projects that are either at the planning or contracting stage, and in the implementation phase, in the framework of the Connecting Europe Facility (CEF) and in the maritime and air transport sector, as well as highlighting the important opportunities under the European Green Deal and Fit for 55.

The conclusions were then entrusted to Costas Katsaros, Vice President of the Cyprus-Italian Chamber of Commerce, who after having thanked the authoritative speakers and the numerous guests present, emphasised the central role of the Chamber in the consolidation and further development of the collaboration between Italian and Cypriot companies as well as the important collaboration with the Cyprus Chamber of Commerce and Industry, the Cyprus-Italian Business Association and the Italian Trade Agency Beirut Office.

At the end of the event, a networking cocktail was held, an opportunity for numerous B2B meetings, followed by a Business Dinner.

The Trade Mission was also an important opportunity for the Italian Delegation to make some Institutional Visits.

In particular, the delegation met Mrs Eliana Charalambous Tanos, Acting Permanent Secretary at the Deputy Ministry of Shipping and the Director General of the Cyprus Shipping Chamber, Mr Thomas Kazakos. The following day, the delegation was received by the Minister of Energy, Trade and Industry of the Republic of Cyprus, H.E. Natasa Pilides and the Secretary General of the Cyprus Chamber of Commerce and Industry, Mr Marios Tsiakkis.

For further information and insights on the activities of the Italian-Cypriot Chamber of Commerce: segreteria@camcomitacipro.it