NewsInstitutional Visit of the Italian Foreign Minister to Cyprus. Consolidation and Development of Bilateral Relations. The Contribution of the Chamber. 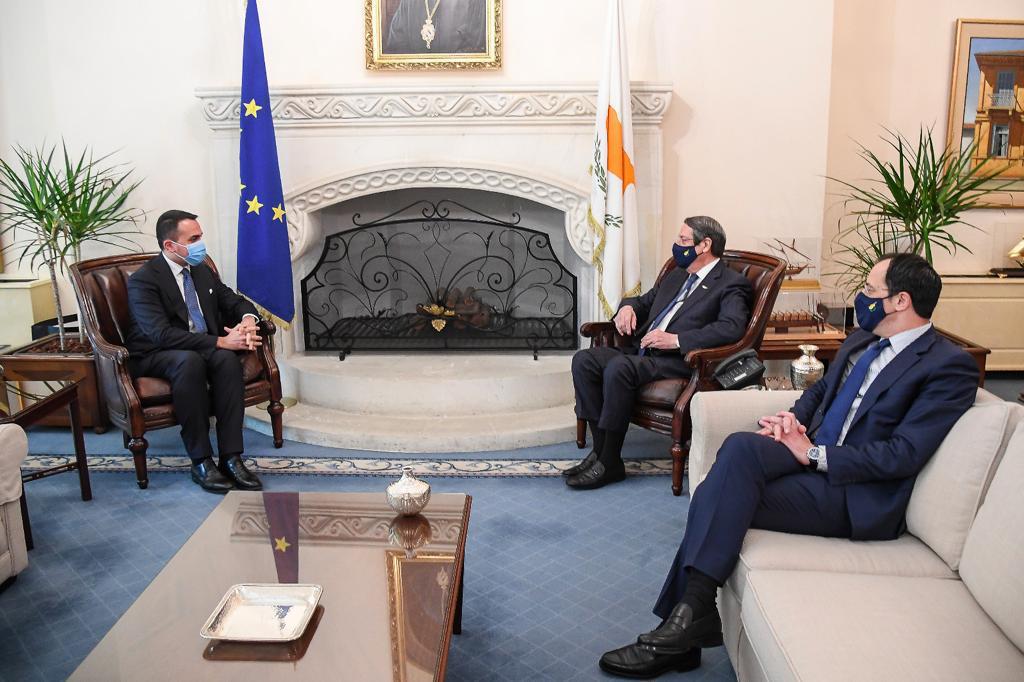 Institutional Visit of the Italian Foreign Minister to Cyprus. Consolidation and Development of Bilateral Relations. The Contribution of the Chamber.

An important institutional visit to Cyprus by the Minister of Foreign Affairs and International Cooperation Luigi Di Maio was held on 9 March 2021.

The Italian Foreign Minister met the President of the Republic of Cyprus Nikos Anastasiades and the Foreign Minister Nikos Christodoulides  in the morning and in the afternoon the Special Representative and Head of the United Nations Peacekeeping Force in Cyprus Elizabeth Spehar.

The meeting was an opportunity to discuss the consolidation and further development of bilateral cooperation between Italy and Cyprus in various sectors including trade and investment, tourism, education, culture and research.

In this regard, a mention was made of the activity of the Italian-Cypriot Chamber of Commerce with particular reference to the great success achieved by the third edition of the Cyprus-Italy Business Forum held in December and more generally to the many initiatives aimed at developing business opportunities. cooperation in the various economic and commercial fields.

These include the field of Research and Innovation, in which a bilateral “Executive Program” was launched with the aim of developing and financing joint projects in relation to which the Chamber has already initiated various discussions with Universities, Research Bodies and Companies of the two Countries, many of which were present at a recent Chamber’s event organized in February which had as guests the Deputy Minister of Research, Innovation and Digital Policy Kyriacos Kokkinos and the Chief Scientist Nikolas Mastroyiannopoulos.

The March Smart Talk of the Chamber scheduled for March 23rd will be dedicated to the energy sector, which will see the Minister of Energy, Trade and Industry of Cyprus Natasa Pilides as a guest and will focus on the perspectives offered by Cyprus to Italian companies in the specific sector with particular reference to the energy transition and the priorities contained in the Integrated National Energy and Climate Plan 2021-2030.

Other topics of discussion were issues of European interest, such as the management of the Coronavirus pandemic, the crisis in Libya, migration, the most recent developments in the Eastern Mediterranean and relations between the EU and Turkey, as well as cooperation in the Med-7.

“Our common belonging to the Mediterranean and European family is the premise on which to build an ever wider and more articulated relationship. In fact, extraordinary opportunities arise from this common belonging, which we want to seize by working together ”said the Italian Foreign Minister. In today’s talks, he added, “we reiterated our intention to further strengthen economic cooperation and investment, especially in strategic sectors”.

In this regard, the President of the Italian-Cypriot Chamber of Commerce Giuseppe Marino once again underlines Italy’s renewed interest in Cyprus and the Mediterranean area, highlighting that the priorities in terms of environment, sustainability, safety and cooperation have been from the beginning at the center of the promotion and development action carried out by the Chamber which will continue with renewed enthusiasm and in this vein to provide support at all levels to Institutions and Stakeholders.

For more information on the activities of the Italian-Cypriot Chamber of Commerce, you can send an e-mail to: mailto:segreteria@camcomitacipro.it.