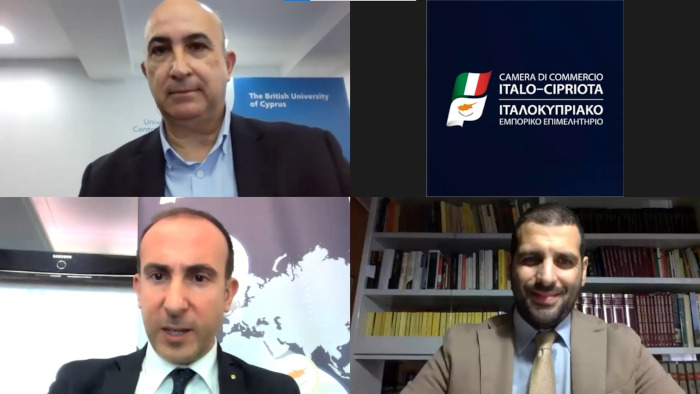 The Italian-Cypriot Chamber of Commerce hosted in the October Smart Talk Panayiotis Hadjipandelis, Chairman of the Board Hermes Airports Ltd. The event was held online on 27th October 2021 at 14:30 ITA / 15:30 CY and focused on “Flight connectivity and Business Opportunities in the Mediterranean Region”.

After the introductory greetings by the President of the Italian-Cypriot Chamber of Commerce Giuseppe Marino, the discussion was moderated by Federico Franchina, Vice President of the Chamber and also a Professor of Transport Law and an Aviation Legal Expert.

The Smart Talk started highlighting the specificity of Cyprus, which is an island in the Mediterranean Sea that presents a unique condition: it has to be connected by a flight network.

He explained that Hermes Ldt. started operating in 2006, and in the first 6 years of business they moved proximally 7 million passengers. The booming of the industry was registered since 2014 up to 2019, when Hermes Airports contributed to 10-12% of the GDP of Cyprus. In 2020 it was experienced a hard drop (-20% in comparison to 2019) with only 2.3 million passengers flying to Cyprus. In this regards, there are several discussions on the table between foreign partners, the Government, Hermes Airports and other tourism stakeholders in order to take significant decisions to recover from the crisis caused by Covid-19.

The current statistical data already registered already a recovery, with 4.9 million passengers in 2021, and by the end of the year, statistical data predict 5 million, while the best scenario of 7.8 million will be hit in 2022. Hadjipantelis also provided additional information on the Cyprus’s airports network, which can count on   70   airlines operating   in   2019, and 62 airlines in 2021. In 2019 Cyprus was linked by 150 routes, and at the moment there are 157 routes serving 40 countries, 91 from Larnaca and 66 from Paphos (total traffic by airport: 70% LCA, 30% PFO).

Furthermore, he referred to the priority of the company, which is to recover the 2019 numbers, creating the good environment to better penetrate the existing market around the Mediterranean. Cyprus doesn’t have the extended territory as other areas, but the low season is a “long summer”, which goes on from March to November (October’s temperature is around 30°C). For this reason, this year’s flow is recording almost the same numbers of tourism’s flow of 2019.

Finally, Hadjipantelis mentioned the discussion with the Deputy Ministry of Tourism to develop a strategy for “Cyprus as winter destination” to convince hoteliers to offer their service and attract more tourists and the important investment that Hermes Airports is planning (€ 160 million) for the expansion of the airports, focusing also on the cargo area. For this reason, they are dialoguing with the government and there are some really interesting opportunities for Italian companies.

The conclusions of the meeting were left to the President of the Italian-Cypriot Chamber of Commerce Giuseppe Marino, who highlighted how Mr. Hadjipantelis is also a valued member of the Chamber’s Advisory Board, dwelling further on the importance of air connectivity as well as on its impact on international business in the area.

For further information about the activities of the Italian-Cypriot Chamber of Commerce and for registration: segreteria@camcomitacipro.it