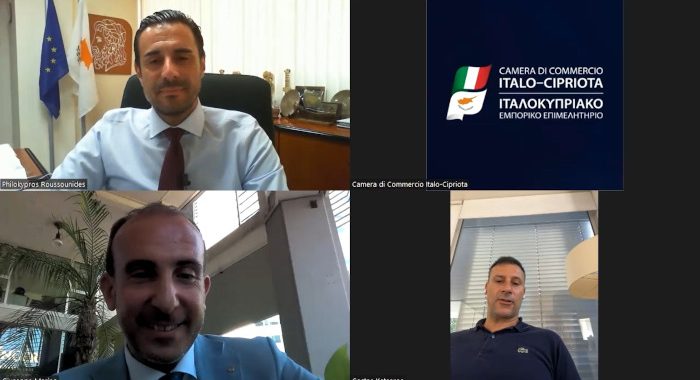 It was held on Tuesday 26th, the July Smart Talk that hosted Philokypros Roussounides, Director General of the Cyprus Hotel Association, focusing on “Overview and Perspectives on the Cyprus Tourism Industry”.

After the introductory greetings, Giuseppe Marino, President of the Italian-Cypriot Chamber of Commerce, moderated the discussion.

The July Smart Talk started by giving the audience a general overview of the main areas of interest of the Cyprus Hotel Association, which is one of the major stakeholders in the tourism industry of Cyprus. The Association is the Hoteliers National Trade Union, founded in the 1930s, and among its main missions are the protection and promotion of the interests of the hoteliers as employers and as professionals, and in general the promotion of Cyprus tourism development.

Afterward, Mr Roussonides gave an overview of the Cyprus Tourism Industry, in regard to the main geographical areas of interest and the main activities in the market, underling that the major cities are the biggest players, as Famagusta counts the 58% of the market’s shares, Paphos 30%, then Limassol and Larnaca the 12%. He also stressed how in the last couple of years the mountain and rural areas have been renovated and are becoming more attractive for people and tourists as well. Mr Roussonides then highlighted how Cyprus is a small island, which allows people to visit the whole land and do different activities in only a short amount of time, also within a day-time, a perfect place also for short breaks.

The discussion then turned to the lack of Russian tourists and its impact on Cyprus’ receptivity this year. Mr Roussonides stated that compared to other countries, Cyprus is one of the hardest hit, as Russian and Ukrainian tourists accounted for 25% of the expected tourist inflow, and now this figure is totally lost (0% at the moment). In any case, since it will be difficult to recover these numbers, Cyprus is carrying out promotional activities and investing in countries such as Italy, France, Germany, and Northern Europe, such as Sweden, Finland, Denmark, and also Poland, in order not to depend on one market such as the UK or Russia. This will make up for the loss and there is a synergy project underway with the Deputy Ministry of Tourism.

In terms of prospects and objectives to lengthen the tourist season, which already goes on up to 8 months, there is a New Government Strategy, in order to have year-long tourism, promoting Cyprus not only as a seaside destination, with long-lasting spring (from March to November), but also promoting sports tourism, medical tourism, cultural tourism, and Christmas Villages. In fact, Cyprus can easily be a year-round destination with several different offers.

In addition, it was pointed out that Cyprus is also often evaluated as a hub for business expansion in the Mediterranean area, and being a developed country in the European Union, with good facilities and modern airports with good air connectivity, it can be a good base suitable for networking or being a destination do both leisure and business travel.

The Smart Talk was concluded with the consideration that the Italian-Cypriot Chamber of Commerce and the Cyprus Hotel Association, in order to keep strengthening the business relations between the two countries, can coordinate actions to arrange International conferences, B2B meetings, seminars, or business visits of delegations both in Italy and Cyprus, important occasions for operators from the same industry to explore possible opportunities.

In fact, he added, there is a huge space to explore for cooperation and collaboration in exploration. Italian brands are very well-known in Cyprus, representing high quality products for Cyprus establishments. Many hotels in Cyprus have shown interest in Italian brands and products, creating the opportunity for Italian companies to expose their products.

Finally, Vice President Costas Katsaros, in his conclusion, underlined how well Mr Roussonides and the Cyprus Hotel Association have excellently faced the pandemic crisis and the lack of Russian tourism, putting in place a great effort to preserve the sector.

For further insights and information on the activities of the Italian-Cypriot Chamber of Commerce, please write to segreteria@camcomitacipro.it