NewsThe condolences of the Chamber for the mourning of Prof. Brandani. 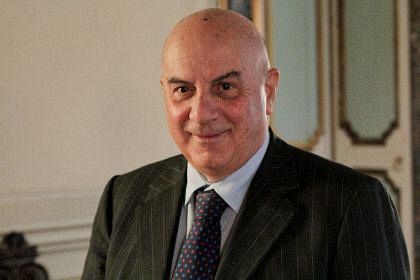 The condolences of the Chamber for the mourning of Prof. Brandani.

Professor Alberto Brandani, a historic Italian managerial figure and a profound connoisseur of Italian politics, culture and information, passed away yesterday in Colle Val d’Elsa (Siena), after a long illness against which he fought with stoic determination and courage.

The President of the Italian-Cypriot Chamber of Commerce, Giuseppe Marino, together with Vice President Federico Franchina, close to the Brandani’s family for their sad loss, remember the man with whom they enjoyed a personal relationship of esteem and friendship.

Prof. Brandani, manager of Monte dei Paschi di Siena for over twenty years, after having held positions in the board of directors of Anas, and later in the Italian State Railways Group, was currently President of Federtrasporto in Confindustria Italia and Fondazione Formiche Onlus.

Trained at the Christian Democrat school of Amintore Fanfani, he had a multifaceted personality, as a keen observer of reality and a sensitive interpreter of changes. Attentive to the formation of new ruling classes, he believed in the close correlation between politics, economics, culture and society and, for this reason, he had founded over the years three institutes of political culture and in 2005 the Fondazione Formiche Onlus, of which he became President in 2008.

His love for reading had led him, since 1985, to preside over the jury of the International Literary Prize Isola d’Elba – R. Brignetti, which includes the most excellent signatures of the Italian cultural scene. Last September, in Portoferraio, he had participated in the 49th edition of the prestigious prize, won by Giuseppe Catozzella, with the historical novel ‘Italiana’.

Prof. Brandani was very well known and appreciated on the Island of Elba: he believed that the prize was an opportunity to encourage young people to read, bring them closer to the study and political culture, principles on which he had based his entire life. For this reason, years ago he had donated 5,000 books to the Marcello Braccani Library of Colle Val d’Elsa, as an impulse to reading, claiming that “Those who read the same book are linked by an invisible red thread, they are united by a single feeling”.

He was an active participant in current events, often a guest in various television programs, expressing his opinions on the facts of our peninsula with grace, accuracy and precise arguments. His far-sightedness in the analysis of the politics of the territory led him to extend his gaze beyond the borders.

Just a few months ago, on May 27th 2021, the Italian–Cypriot Chamber, in the person of its President, signed a Cooperation Agreement with the Fondazione Formiche Onlus, which formalized the collaboration between the two entities to cooperate internationally in the field of applied research, technology transfer and promotion of Italy-Cyprus relations.

“He leaves a great void” – is the comment of the Vice President of the Italian-Cypriot Chamber of Commerce, Federico Franchina. “His vision of the world and of trade relations at the international level were of great stimulus to face a delicate challenge such as the promotion of economic development in the Mediterranean area. The simplicity of his insights, his capacity of correlating different themes and topics, of finding solutions to complex problems together with his extraordinary humanity, is the greatest legacy for all our associates.”

“Prof. Brandani was an expert in creating relationships that would contribute to the revival project of Italy and he had seen in the cooperation with our Chamber an opportunity for economic and cultural growth,” said the President of the Italian-Cypriot Chamber of Commerce, Giuseppe Marino. “We had met him a few weeks ago and, despite his health conditions, he had taken care to support us in the organization of our annual Business Forum, giving us advice on topics and planning in terms of economic and institutional relations. His example of man and strategist can only boosts in putting in place all the Italian best practices in which he firmly believed.”

The two institutions will continue to work together, although deprived of the incomparable contribution of Prof. Brandani, carrying out the agreements undertaken, developing opportunities for comparison and exchange under the aura of common Italian and Cypriot interests.

For further information on the activities of the Italian-Cypriot Chamber of Commerce: segreteria@camcomitacipro.it