NewsThe Minister of Energy of the Republic of Cyprus guest of the March Smart Talk. 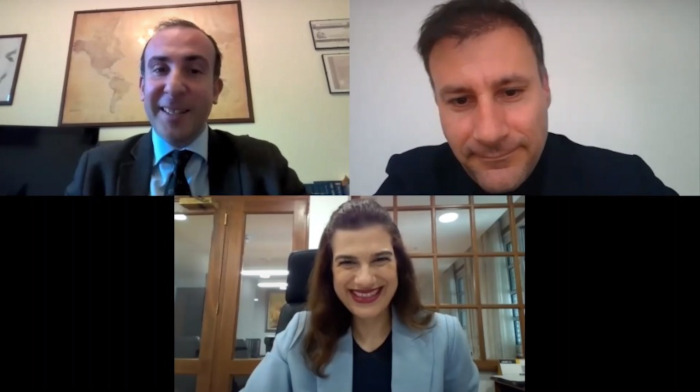 The Minister of Energy of the Republic of Cyprus guest of the March Smart Talk.

The monthly Smart Talk organized by the Italian-Cypriot Chamber of Commerce was held on March 23, 2021 which saw as guest the Minister of Energy, Commerce and Industry of the Republic of Cyprus H.E. Natasa Pilides.

After the introductory greetings by the President of the Italian-Cypriot Chamber of Commerce Giuseppe Marino, who recalled the long term friendship with Minister Pilides, who gave an important support to the activities of the Chamber even in the previous institutional roles she held, the Vice President Costas Katsaros traced a brief biographical profile of the Minister before starting the discussion.

Minister Pilides, answering to the various questions put to her by the President of the Chamber, Giuseppe Marino, touched on several points of great interest including the recent development in the renewable energy sector and the reform of the electricity market, also focusing on the important role of Cyprus in the East Med Energy Corridor and on the strategic cooperation between Mediterranean countries.

The issues addressed also include the status of the important projects for the storage and distribution of LNG to Europe and to the Asian market, the prospects in the green hydrogen sector and also the progress of the projects relating to the Interconnectors EuroAsia and EuroAfrica.

Of particular interest was the in-depth study of the ambitious energy transition plan supported by the European Recovery and Resilience Plan focused on green growth, sustainability and circular economy which certainly represent areas where there are great opportunities for Italian companies in the sector.

The conclusions of the meeting, which was attended by over fifty important Italian and Cypriot companies operating in the energy sector, were left to the Vice President of the Italian-Cypriot Chamber of Commerce Costas Katsaros who highlighted how the recent visit by the Minister of Affairs Foreign Affairs Luigi Di Maio in Cyprus and the statements by Prime Minister Mario Draghi in his first speech are a strong signal of the willigness to strengthen relations between the Mediterranean countries in which the energy sector certainly plays a key role.

In this regard, Minister Pilides reiterated the excellent relationship of collaboration between Italy and Cyprus, confirming that even in the recent meeting between the Foreign Ministers of the two Countries, synergies in the field of renewable energy and new technologies were discussed, mentioning the enormous opportunities for companies in the sector and recognizing the important role of promotion and support played by the Italian-Cypriot Chamber of Commerce.

For information and insights on the content of this article and on the activities of the Italian-Cypriot Chamber of Commerce: segreteria@camcomitacipro.it